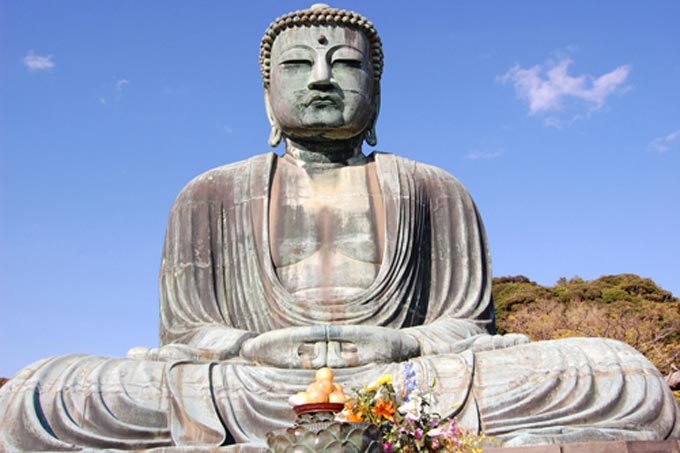 The statue commonly known as Kamakura Daibutsu (Great Buddha of Kamakura), a colossal copper image of Amida-butsu (Amitabha Buddha), is the principle image of Kotoku-in. The fact that it sits in the open air makes it unusual amongst large Buddha statues in Japan. The Great Buddha, designated a National Treasure by the Japanese government, is some 11.3 meters tall and weighs around 121 tons. Though in size it falls short of the Great Buddha of Todai-ji Temple at Nara (an image of Rushana-butsu [Vairochana Buddha]), it essentially retains its original form; as such it is an invaluable example of Japanese historical Buddhist art. According to the Azumakagami, a chronicle describing the achievements of the Kamakura Shogunate from the late 12th century through the mid-13th century, construction of the Great Buddha began in 1252. It is also believed that the priest Joko gathered donations from the people to build it. However, much remains unclear about the specifics of the Great Buddha’s construction, and the artist has yet to be identified.

When it was first built, the Great Buddha was enshrined in Daibutsu-den Hall, but ancient records (Taiheiki and Kamakura-dainikki) tell us that this building was damaged and ultimately destroyed in typhoons hitting in 1334 and 1369, and subsequently in a severe earthquake in 1498. Since then, because it sits out in the open, the statue itself has been ravaged by the elements. During the mid Edo period (1603?1867), Jodo Sect priests Yuten* and Yokoku endeavored to repair the Great Buddha with funds provided by Nojima Shinzaemon, a merchant of the Asakusa district. Along with the repairs made to the Great Buddha, the two priests also restored a temple dedicated to the practice of the nenbutsu, calling it Shojosen-ji Kotoku-in.

Today, 750 years after its construction, vast numbers of Buddhists of all sects from around the world and Japan come to pay their respects to the Great Buddha.

※ 1637–1718. A high-ranking Buddhist priest who served as the 36th head of Zojo-ji Temple, headquarters of the Jodo Sect

Kotoku-in (officially known as Daii-san Kotoku-in Shojosen-ji) belongs to the Jodo Sect, a traditional Buddhist sect founded by the priest Honen (1133–1212). Honen was a devotee of Amitabha, Buddha of the Western Pure Land. It is believed that the original vow of Amitabha Buddha is to liberate all beings, irrespective of sex, age or social standing, regardless of whether the individual has engaged in good or evil deeds in their lives. According to the Jodo Sect belief system, one only needs to chant the nenbutsu* to receive the protection of Amitabha and be reborn in his Pure Land. This is the teaching of the Jodo Sect as taught by Honen.