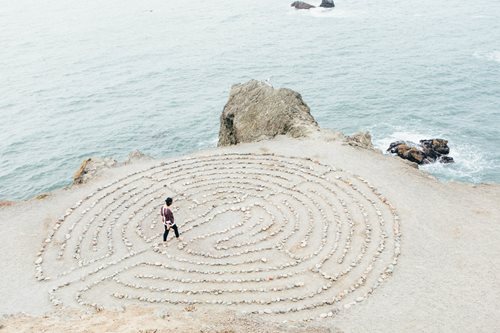 “Oṃ śhānti śhānti śhānti.” This mantra—meant to bring inner peace to those who chant it—is an example of the many connections between Buddhist teachings and mental health. Although Buddhism is primarily known as a spiritual tradition, it is also a lifestyle that encompasses the mind in almost all forms of practice. “Buddhism is known as the science of the mind,” clarified Jude Demers, a practicing Buddhist who lives with mental illness.

The practice of Buddhism puts the individual in the role of “scientist,” running experiments on their own mind to see what works for them. The idea is that through this process (known as mental training), a person can achieve inner peace. And according to Buddhist doctrine, happiness comes from inner peace.

The main form of mental training is meditation. Studies show that meditating has many mental health benefits such as reducing stress, anxiety and depression. It accomplishes this over time through teaching people to experience unproductive thoughts from a different perspective. Rather than letting a thought nag at someone’s state of mind, meditation teaches them to recognize that it is a thought with no benefit and then release it.

Meditation is accomplished in many ways—deep breathing, yoga, chanting—and its goal is to understand and control the mind in order to achieve enlightenment or nirvana. Nirvana is a mental state of peace and happiness; it is the highest state someone can achieve in Buddhism.

“Basic Buddhist teachings are about practicing kindness, humor and compassion towards other people,” Demers said. One of Buddhists’ primary principles is that there should be no agenda other than to help someone.

In Buddhism, all people are equal. “Buddhism gives a person a feeling like being a wave in the ocean rather than feel like one's life is an isolated phenomenon,” Buddhist expert Jason Henninger explained in an interview with Health Central. “A wave is a wave, but not separate from the rest of the ocean. Buddhism gives its practitioners a profound feeling of connectedness without loss of identity, and never in terms of superiority or inferiority to others.”

Being in Charge of Our Actions

Karma is an often-misunderstood Buddhist ideal. While most people see it as “what goes around comes around,” karma in Buddhism actually encompasses the idea that a person has the ability to change any circumstances they face in life. It is meant to be a doctrine of responsibility and empowerment. For a Buddhist, hope is a decision.

“The mind is everything. What you think you become.” - Buddha